Ruby is a popular, open source programming language with a powerful and practical, yet natural and easy to read/write syntax. Ruby combines the best practices from various solutions to provide a unique object-oriented language, which aims for simplicity and provides such features as basic & special object-oriented features; operator overloading; exception handling; iterators and closures; garbage collection, and more. 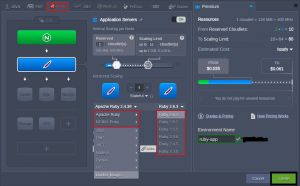 If needed, the NGINX Ruby stack can be easily configured to work with different inbuilt servers: 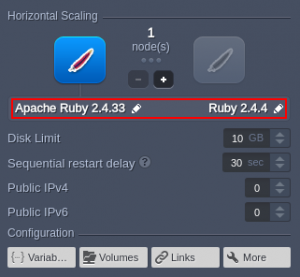 You can select the required version of Ruby via the topology wizard during the creation of a new environment, as well as adjust it for the existing instances via container redeployment.

Follow the below link for the Deployment Ruby project

Ruby Dependency Management
All Ruby instances within Cantech Cloud  are provided with the Bundler dependency manager for automatic tracking and installing the exact gems and versions, which your project requires. If the project has a Gemfile file in the root folder, it will automatically resolve dependencies with Bundler after deployment to the server without you having to perform any manual intervention.

Also, if needed, you can include any Ruby framework into your Gemfile (Sinatra, Rack, therubyracer, Ramaze, etc.) or utilize Ruby on Rails – one of the most popular frameworks for developing and implementing web applications, which is available by default. Refer to the Ruby Dependency Management documentation for additional information.

In order to automate the repetitive actions that Ruby projects need to perform after the application is deployed (e.g. db:migrate), a rake_deploy file (located in the root folder of the project) can be created.

The file should contain a list of commands (each one from a new line) that will be executed consecutively via the rake tool after each restart of the Apache/NGINX node. After successful execution, the rake_deploy file is automatically removed. Refer to the Ruby Post Deploy Configuration documentation for additional information.

If you need any help contact our support, Open support ticket from client area.

Was this article helpful?

In the end of 2009, when we set up our own hosting business which is specialized in web space packages for whom who things to choose reliable hosting with best price. We covered market initially Gujarat in those days. At that time the market was already saturated with hundreds of similar companies in India alone.